5 Signs You're The Girl On The Side (Sidechick) 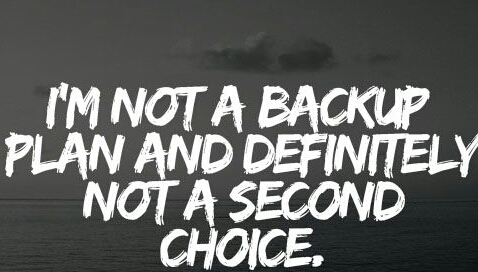 As women I would hope we all would want to be a mans one and only. It's so hard dating these days because guys feel like its a buffet, full of all the vagina they can get. You can be the most beautiful woman in your town, but that doesn't mean a man will change his ways for you. Having a side chick is becoming a trend for men. I never want to be a side chick and I'm sure you ladies reading this don't as well.

Look I have been a side chick by default, once I found out the truth he got dropped. Lets just say due to womens intuition I saved myself. I almost got caught up in a "sidechick predicament"

If you've  been wondering some thing's about a guy I will help you figure out if you have been getting played. Now ladies, you have to ask men questions. If you don't ask, he isn't going to volunteer. A closed mouth dont get answers sis.

Check out some signs you may be a side chick. Better to know now then later.

He is unavailable a lot after 7pm.

A man who has other women will become busy. If you were use to him always responding to texts and calls quickly but it suddenly changed. That may mean he's around someone he doesn't want you to know about. Do you call him, then he texts you? You are wondering why can't you call me? He's busy, well clearly not to busy to text. He sees your call, so ask yourself why he didn't answer.

You have never been to his home

If all he does is come over to your place, that's a issue. Dating should be a two way street. He visits you, you visit him. Also if you have asked him where he lives and he never gives you a street address or even a neighborhood, thats shady as hell. I have even said well what if its a emergency and i cant reach you by phone? Try saying something clever and see if he tells you. He clearly doesn't want you popping up at his house, but the question is why.

If you about that life call a few friends and follow him one night after he leaves your crib. Best to know now than later.

He never spends the night

A man who has a main woman doesn't have time to spend the night. If he always makes sure he is out the door before midnight you should question him on that. Ladies think clear on this one. After being intimate, does he ask to use the shower, or use the bathroom before leaving your crib. Guess what, he is washing off evidence before he leaves. Or his phone starts ringing but he ignores it. Look at your clock and see how long it takes him to say "I gotta go . That means his main girlfriend or wifey is wondering where he is.
" I remember a guy I was dealing with phone kept going off. Now he was deadass asleep in the next room. I picked the phone up but it had a lock on it. I quickly saw the texts on his iPhone stroll at the top too fast for me to read it. Im a samsung chick so I had no idea on breaking those codes. I googled that you can restart a iphone and all the unread tests will stroll at the top even if phone is locked. Well I did that shit. Let's just say Baby mama Jasmine was wondering why Robert left his laundry unfolded and accused him of being with another bitch (I would be that bitch). Lets just say I didn't fool with him again."

His Family hasn't met you

This is the key one here.  If he always talks about his kids, or his parents or grandparents on how much they mean to him. Wouldn't you think you should meet them, or they should at least know your name? If he is talking to a family member on the phone and says he's at the store but he is really sitting by you. Ask yourself, why didn't he say he is with me. He doesn't need his family knowing about a sidechick.