Date Night, Who Pays, He Or She? 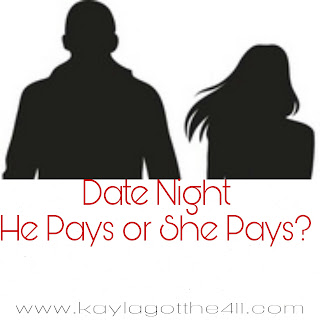 Before the 90s it was frown upon for a man to allow a woman to pay for a date or drink.
But apparently this decade more women are footing the bill and buying men drinks at bars. Some women feel like since they can afford it, they will rather pay instead of looking like a gold digger. Then there are men who feel like as a man its insulting and feminine to have a woman pay.

As a woman I feel like a man should always pay for a date when he is trying to pursue you.  If she pays for the tip its acceptable. But for a woman to open her purse to pay for a man she's  only dating, is just not a good look. And if he doesn't have the funds to always pay. Be honest and let her know. I hate a man who is financially not there but pretends he got it like that. Because what will happen you will slip up and get caught up, especially if the card declines.

But once you are dating or building I feel sometimes a woman can pay for the drinks, or the movie. It will show him you are in it for the long run, and you are caring and sincere. But it shouldn't be often just occasionally.
But men who just go out and expect women to pay says a lot about how that man was raised.

Thoughts? Think About It.