Camila Cabello Walks Away From Fifth Harmony Leaving Only 4 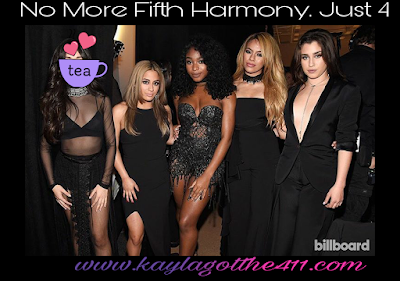 Well another one bites the dust. The group fifth harmony just announced Camila the lead has left the group. She's being doing her solo thing a while now. The new single Bad Things with Machine Gun Kelly is a smash me and my daughter love it.

After Zayn left one direction the group continued and Zayn went to have success. My only concern is how she did it. Zayn left in a sneaky way nobody knew he was working on solo stuff. Camila just shot a video for her single and performed. So it's been clear. This group wont last after the 3rd album. I can see it.

These girls have been having been beefing since the summer. At the Canada's Much Awards these girls were salty Camila won with her single she had with Shawn Mendes allegedly. Laurens mom went off on Twitter when Camila manager alluded that she won 4 awards that night. Lauren mom had to set it straight 2 of those were fifth Harmony's boo boo. The tweet was later deleted.

Normani was forced to speak out after rumor spread she was being mean and shady when she couldn't think of anything nice to say about former band mate Camila during Facebook live. Damnnn. She had lots of nice things to say about the others though.

Well the group let this statement last night. I wonder how they will do after their lead leaves. I predict Normani is excited she will probably be the lead now.  Oh and they have unfollowed her. 😩 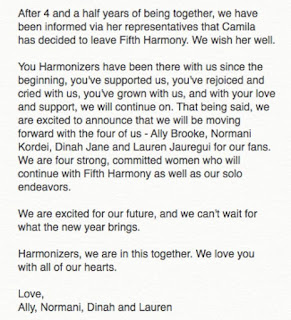