Lurking !!!! When Is It Necessary? 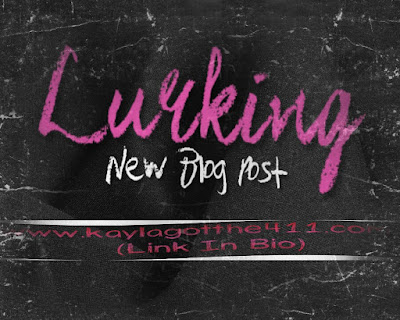 Sometimes you find yourself on a persons page, then see someone you know and go to their page, then another and another. Yes darling, you are a lurker. Don't trip it happens to all of us, but lurking isn't such a bad thing. For a woman who is mysterious about her mans activity you may want to lurk. Now I know there are some who believe"WHATS DONE IN THE DARK WILL COME TO LIGHT" Well I believe "If you think it, believe it, and look into it"

I have been cheated on before like allot of other good women. But because of my woman's intuition and smartness I listen to my gut and look into niggas.

A few months back I was talking to a guy who seemed like he was digging me. He swore he was different not like the rest. God fearing, ambitious, good independent man, I thought. I told my best friend about him she was so happy that damn I may have found a good man. But I said to her "girl something not right". I kept saying it and she thought I was tripping and letting my past mess this up. So I followed my gut. After LURKING, I came across his ex, who I found out he had another woman in their shared home and that was the reason they broke up. After a few mins of lurking each week I came across a girl who was the reason for his last break up and was actually his girlfriend now. Yasss! He sweared he was different, and wouldn't lie, and cared. Church boy act was a front. Let's just say I scared him so bad he went ghost.

Don't be the crazy chick going through his wallet, but if you think his ass up to something. Lurk and you may find resolution to the truth. Check out these 4 signs you need to take on the role of a detective and look into your partner. There is nothing worse than those women who are married 20 yrs and find out their man was creeping for the last 10 years 💀. People leave clues like mice leave crumbs. Don't stalk the man and catch a charge, but look into it if you think something.