What A Girl Wants 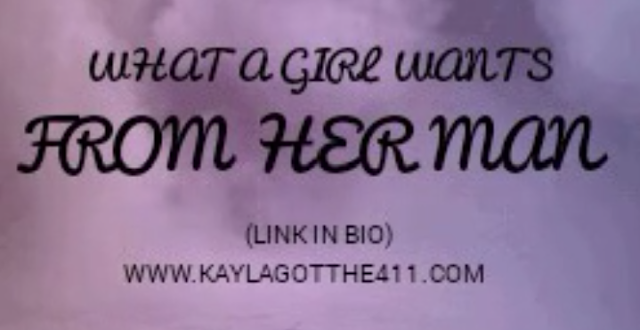 What a girl wants? That's the million dollar question for men. Its something many men can't get understand.  Men over think situations.  Trying to figure women out would be easier if men actually listened. Many women are so unhappy in relationships be cause their guy just doesn't seem to understand them. The number one thing a woman wants, is to be happy.

Being in a unhappy relationship is miserable. Love is important but happiness is a big part of love. A girl wants to smile every time she sees her man. A girl wants to get chills every time her man touches her. Not annoyed and angry every time he comes around. If a woman is not happy, a real man should do his best to find out why and fix things. Put effort into showing her you care. If she still isn't happy ,what matters is your effort.

Society has painted this picture where a man should protect and provide for his woman. In 2017 women are bosses and doing for themselves. Don't get misunderstood. That doesn't mean she wants a man with no car. Or a man who cant keep a job. If she loses her job or become sick, she wants to feel that he will hold it down. Stability in a man should be a goal when dating. Allot of women sadly don't have this. Trust me every woman wants a man with his shit together.

Respect also means "treat me how you want to be treated". Men are really getting disrespectful. Anything that will hurt her or embarrass her is disrespectful. A woman's pride and self esteem could be destroyed because of the disrespect he caused her. When it comes to respecting a woman, talk to her with respect. Putting her feelings in consideration is key. Lastly always putting her 1st. Never have these chicks laughing at your girl.

A girl wants a man who studies her body. Pleasing your woman sexually is key in a relationship. Women just want their man to please them, and treat their bodies like its theirs.  Listen to her desires and turn ons and offs.

Nothing is sexier then a man who has life goals. Who wants a bum with no goals, no life plans or future? A woman seeing her man try to accomplish his goals or become better is inspiring. Thrive to better yourself, even if you have reached your highest potential.

Women want to hear it from her man and not someone else.  Honesty is what women crave. Nothing hurts women more then a lie. Be honest with her is all she wants. Truth hurts, but lies hurt worst.

Its a terrible feeling to not feel wanted on needed. We want to feel like he cares. Whether its returning her calls or texts, or asking how our day was. Little things add up to show us we are important. If she's craving your time ,make a effort to give her quality time and make her feel important .

I have yet to meet a woman who enjoys being cheated on. Who wants to share their man? I would hope no one. We women just want to be the only woman in our relationship with our guy. A scenario that of him and someone else is heart breaking enough.