I grew up in Augusta, Ga born and raised. My family and friends still reside here.  I have been in Atlanta Georgia 7 yrs now. Since Augusta is my hometown I stay on top of the news. Right now this story about a beautiful young girl name LaTania Carwell who is known as "Janell" is touching me. I want to share her story with hopes someone knows something and can reach out. First off lets start from the beginning.

April 21 Latania Janell Carwell, 16, and Leon Lamar Tripp, 38, were last seen on Monday around 1:30 a.m. at the 3100 block of Tate Road. Lamar is her step father. Both Leon and Janell were reported missing after not returning from a supposedly trip to help a friend with car trouble.

"I heard the truck crank up and I heard the backdoor slam. I said what in the world is this man doing," said Tripp.

Tripp says she quickly called her husband. "He immediately answered and he said babe I'm sorry. I know what you are fixing to say. I have Janell. I said oh thank God," said Tripp. Leon told her he was taking Janell to help him fix a man named "Maurice's" car in Clarks Hill, GA.

Now this was at 1:30 am she allowed this man to take her daughter to help fix another mans car. Read on.

Mother on the news.

So a week goes by and iinvestigators say they have found the car he was driving not even a mile away from their home.

Investigators also got a tip he was in Atlanta, GA.

May 1st comes around police put out a kidnapping charge due to Leon Tripp was seen on April 21, 2017 at the Stop N' Shop Grocery located at 785 Lee Street SW Atlanta, Ga, but Latania Carwell was not with him. He was spotted but the young girl was not. So police did the best next thing.

By now the mom is still acting clueless.


So even after they found the car, plus her husband is spotted she is still taking up for him.

3 weeks later the step father is arrested. Leon is in jail on a felony aggravated stalking charge. He was booked into the DeKalb County jail on Tuesday.

Now you may be asking, why stalking? That is something I am still confused on. But he was also wanted for kidnapping in Augusta, GA. I figure because he was on probation for a previous stalking charge. 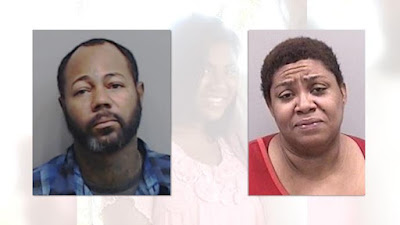 Here comes the boom. Investigators have learned Tanya Faye Tripp yes the mom of Latania"Janell" Carwell, was in contact with Leon Tripp, the girl's stepfather. They say she had recently moved from her residence in Augusta to the metro Atlanta area to be with Leon Tripp.


Augusta investigators along with the Atlanta Police Department were able to locate Tanya Tripp and she has been arrested for Hindering the criminal. Wow right?

Their family home was evicted and police officers came and started searching it yesterday. So far no word where this 16 yr old is. Both mom and step dad are in custody and there is a $1000 award for any one with clues. So far it is a waiting game hoping they confess where this girl is.

Janell's Story Was Featured On Vanished Podcast. PLEASE CHECK IT BELOW TO GET A MORE UNDERSTANDING

Leon Trip was sent from Dekalb Co Jail, to Fulton Co jail.
06-12-17Augusta Sheriff: After conducting interviews we no longer consider this a missing investigation, but a homicide investigation. @WRDW_WAGT

12-22-201
Months have went by and still no word on where Janell remains are. The stepfather has been given 500k bail.

Attorney Natalie Paine gave new details an attempt to have Leon bond set at $1 million dollars. Natalie claims he told investigators he was going to show them where Janell’s body was, but spoke with his attorney and decided not to do that.”