Kevin Hart : Once A Cheater, Always A Cheater?

Social media is going in on comedian Kevin Hart,  and I'm joining in.  Let me just say Kevin Hart "Good Guy" act has always been suspect to me.  Yes he is talented but putting your wrong doings in your comedy doesn't take away from what you did.  Now if you stumbled across my page on Google,  or link then refresh yourself on a very recent fave post titled Who's Man where I talk about how Kevin Hart cheated on his ex wife with his current wife Eniko "Allegedly. "

Anyways, so Kevin posted this bizarre video of a part 3 to Usher Confessions where he's apologizing for some shit we have no idea about. But he's basically saying it's for his wife and kids, and goes on how he needs to do better.  He also says he will not be giving his money to anyone seeking financial gain.  Take a look at the video and lets keep chatting.

So social media has kind of read between the lines of "HE CHEATED,  SIDE CHICK IS ASKING FOR A CHECK,  HE IS SAVING HIS ASS BY EXPOSING HIMSELF".

So of course his die hard fans who are in denial along with his 2nd wife Eniko ( Catch The Shade) feels no one should assume it's infidelity. Well when you post a apology video not acknowledging what the hell you're apologizing for,  we can assume whatever.

Now this is a question that came to mind.  If you cheat once,  are you always a cheater?
Let me tell you from experience.  I spent 4 years of my teen years with a excessive cheater. He constantly was getting caught up with chicks until he eventually cheated so much I kept forgiving him and just said No More.  People who cheat know what they are doing.  The goal is to not hurt anymore people after you get caught once.  But in my opinion most cheaters are always a cheater.. It's like robbing a bank and getting away with it.  The adrenaline rush of getting away with it is a thrill. Very similar to cheating.  When they cheat and don't get caught no different. If it worked once why not try it again.

However, if their partner will forgive them, why not try it again? That's how many cheaters think. There's also this new thing where people think let me expose it to my partner because it will sound better coming from me.  Soooo,  being honest about your infidelity is a better idea than lying about it.  See how stupid and smart that sounds.

Let's see how this plays out.  Let's wait on the anonymous person to come forward soon.  I'm sure they mad that Kevin took it upon himself to half ass expose himself.

1:59 p.m just saw TMZ got word that someone is exhorting Kevin Hart with some kind of allegedly mini sex tape. This is so bad. I really want to say Karma is a bitch to his new wife Eniko but I choose the door of not petty because she's with child. 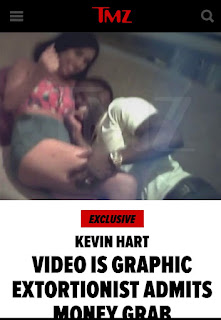