Her ex was taken into custody after he started a fire and shot himself during a two hour long standoff with police.
Police found Quantez at a family members house on Friday, four days
He also shot himself and tried to start a house fire before swat came in.  Also new discovery,  Tyrika called police to warn them Quantez had been threating to kill her a week before and was stalking her at work.  Again the police failed another one of our girls.  R. I. P angel he is caught you will get justice.

22 year old Tyrika Terrell was shot and killed by her ex boyfriend and child's father at her job.  Tyrika worked at the post office for 3 weeks in Decatur Georgia,  when her ex stalked her job at the near by coin laundry before gunning her down at her job. Witnesses say the gate was not secure and he came right in without a problem entering.  Tyrika mother was waiting to pick her up when the gun shots were heard.  Neighbors say he was a violent guy and had a temper.

Please keep Tyrika family in your prayers but most importantly her child who is now motherless. Girls please get out the first sign of abuse or violence.

This is real shit.  Your life matters. These men will never change. You are precious and don't ever allow a man to hurt you.  If you can't fight back, reach out for help until someones listens and helps. If you know someone who is with a abusive person please helo.  Don't wait until a tragedy like this hapoens


So far the shooter is still out there.
Tyre is 5 feet 8 inches tall and weighing about 160 pounds. He was last seen running towards Wesley Chapel Road. Police consider him armed and extremely dangerous.

Her family has started a go find page.  She was a young mother and has a child who has now lost a mother. 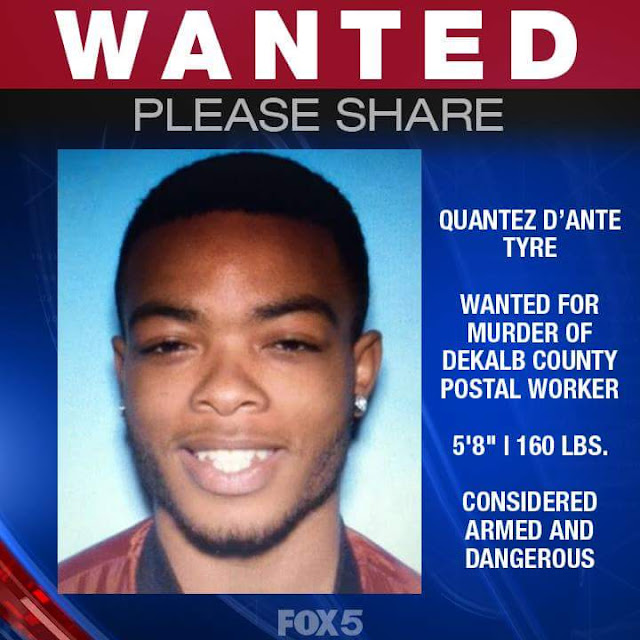