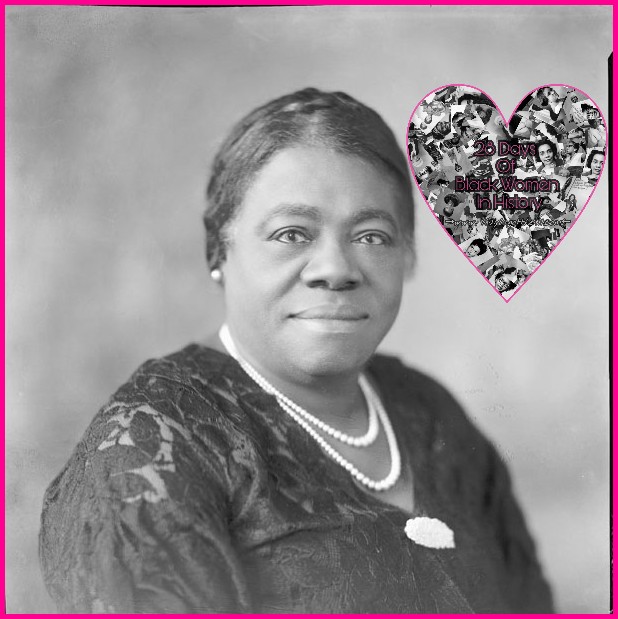 Mary is someone in black history I look up to.  She was born in South Carolina 1875. She grew up with both parents both who had been slaves and in a house with 16 siblings. Mostly everyone did field work like picking cotton and farming.  Mary got a blessing when a school for African American children opened near by. By her attending that school she was able to share what she learned with her family. She had to walk miles everyday but did it because she was eager to learn all she could. She went on into life to actually earn a scholarship to Barber-Scotia College in North Carolina. She was so passionate about education she even went to Dwight Moody's Institute for Home and Foreign Missions and later became a teacher back in South Carolina.

Mary believed that a highrr education was a way to advance as a African American. She started the Daytona Normal and Industrial Institute for black girls in Daytona, Florida, in 1904. Starting out with five students, she eventually increased it to 250 students over the next years.

With her school being such a success she created the National Council of Negro Women in New York. Franklin Roosevelt made her the director of the Division of Negro Affairs of the National Youth Administration.  She went on to ruffle a few feathers including the Ku Klux Klan who hated the work she was doing by helping blacks get educational skills. She was a powerful black women encouraging blacks to get vocational learning so they could provide for themselves instead of doing farm work. She worked with the NAACP and National Negro League.  Mary contributed to World War II by being a assistant director to the Women Army Corps and helped African American Women Who wanted to join the military.

Mary was one of the world's leading educators, and activist. She later died in May 1955 leaving behind a legacy she is still being reward for.


"I leave you a thirst for education. Knowledge is the prime need of the hour." Bethune closed with 'If I have a legacy to leave my people, it is my philosophy of living and serving.