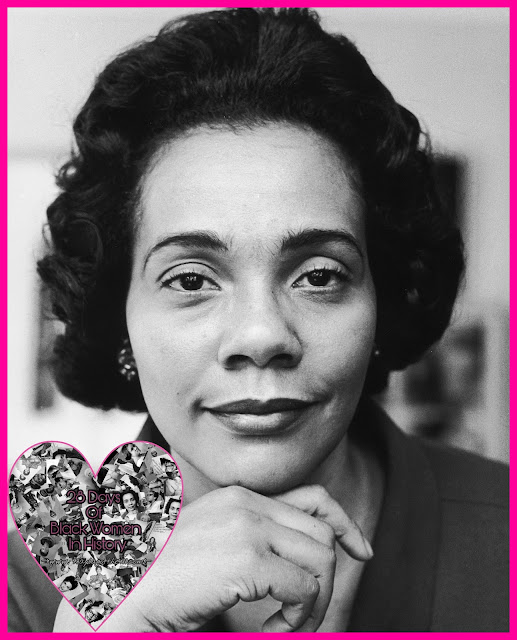 The strong, talented, civil rights activist, writer, daughter and wife Coretta Scott King is what you call a strong black woman.  She was the wife of Martin Luther King Jr.  After his death she kept his legacy alive. Let's go right in.

Mrs . King was born in Alabama 1927. Many people don't know she had a passion for singing and playing the violin.  After graduating high school she went to Antioch College in Ohio.  There she received her Bachelor of Arts in music and education in 1951. She moved to Boston to attend New England Conservatory of Music in Boston, Massachusetts.  While in Boston she met Martin Luther King Jr.  She eventually married Martin and had 4 children. 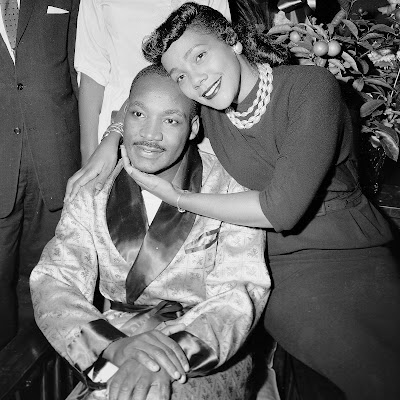 She was heavily involved in her husbands civil rights movement, and was right by his side during the 1950s and '60s. Coretta was even part of the historic Montgomery Bus Boycott in 1955.  She's worked to make sure the Civil Rights Act was passed in 1964 along with others. Coretta had the same beliefs as her husband and that was equal opportunity, and justice.  She wore many hats also as a public mediator and liaison to peace and justice organizations.
She was more than a wife and mother she made sure to continue her husband's legacy after his aassassination in 1968. She took on the role for racial equality  and became active in the women's movement.  She founded the King center in honor of her husband's attributes. Today Martin Luther King Jr birthday is a national holiday.  Ronald Reagan signed the legislation because of Coretta dedication to get it did
She was highly known in the political world especially for the Kennedy's who admired her and her husband's well doings.

In 2005 Coretta died to complications dealing with cancer. Her legacy was celebrated with over 10,000 guest at her funeral.  She was inducted into the Alabama Women's Hall of Fame after

She was the backbone that held this country together after the death of Mr. King that led many feeling hopeless and discouraged. She was left to pick up the pieces and raise 4 children all while being strong and still fighting for a cause.
Email Post
Labels: Black history black history month black lives matter blogger Coretta Scott King Harriet Tubman Martin Luther King Bessie Coleman Mary McLeod Bethune mlk podcast Rosa Parks Sojourner Truth Womensrights