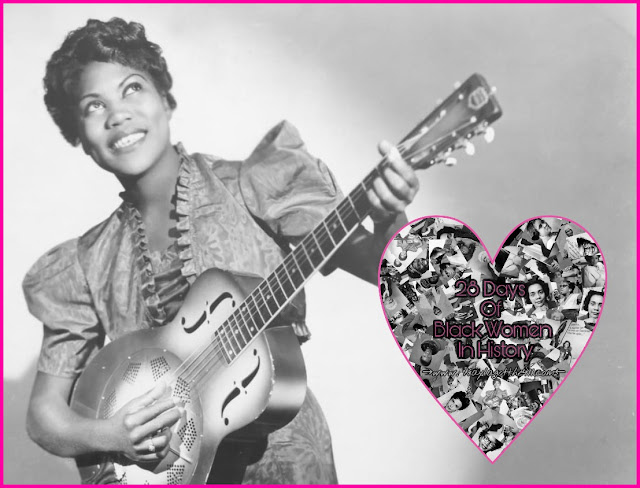 Also known as the God Mother of Rock N Roll is Sister Rosetta Tharpe.  This woman is a legend in the rock n roll industry but hasn't got much of the recognition like the men who she inspired like Elvis Presley who listened to her growing up. She was the type of artist to shout, and swing hips before Little Richard and Johnny Cash. She turned this type style into a international sensation honey. Let me just say she was a bad ass woman.

Rosetta Nubin is her birth name. She was born in Arkansas. When she first picked up a guitar at age 4 who knew by age 6 she would be performing with her  mother and a evangelist group in churches in the South. Rosetta and her mother continued playing all the way to the 1920's spiritual music, which is now known as gospel.

She had a very unique voice. Her particular style was a mix of blues, jazz and gospel. During the 1930s it was not typical to see a woman playing a guitar especially a black woman. People in the gospel community had a hard time accepting her also. She never let the haters change her. By age 23 in 1938, she joined the Cotton Club Revue. It was a New York City club that became very popular. Rosetta had a hit with her single, "Rock Me."  It had a traditional gospel and rock 'n' roll vibe mixed with blues.

Now her music was kinda sexual but was also gospel so you can imagine the uproar she sent people . She was dominating the industry as a black woman guitarist. She even collaborated with many men in her field.  By the 1940s she even collaborated with white artists Jordanaires. Now it was still segregation while she was performing for mixed audiences. She wasn't able to sleep in the hotels so she slept on the bus. She even had to get food from the back door because she couldn't come inside. She did what she had to do, so she could be successful.

Later she started to get a celebrity status. Around the time of  World War II she created a song called
"Strange Things Happening Everyday," with Decca Records. That song reflected on everything going on in the world at that time. It is her biggest record to date. Now some people think it's gospel ,and some think rock n roll. You listen and decide.
"STRANGE THINGS ARE HAPPENING EVERYDAY  "

She broke down the door for black women who wanted to play instruments the men did especially guitar. She toured in Europe years before dying in 1970s by a stroke.
She influenced many of your favorites like Chuck Berry and Elvis Presley. Because she was a openly bi sexual woman who played gospel in rock n roll, the industry didn't give her the recognition she deserved. But in 2007 she was inducted into the Blues Hall of Fame. Recently she was elected into the Rock Hall of Fame.
Email Post
Labels: <br> Black history black history month black lives matter blogger feminism girlpower mtv Music podcast rock n roll rolling stone Sister Rosetta Tharpe tbt Womensrights